Frederic Ogden Nash was an American humorist who lived from 1902 to 1971.  He was born in 1902 in Rye, New York, where he grew up with well educated parents.  Microsoft Encarta 95 said that his parent’s names were Edmund Strudwick Nash and Mattie Nash.  During his childhood years, Nash was educated at several private schools.  At these schools, he enjoyed writing his own comical and dramatic free verse poems. After graduating out of grammar school, Nash moved on to one of the best private high schools in the east:  St. George’s in Newport, Rhode Island.  Moving on in his life, he enrolled at Harvard at the age of 18 (from 1920-1921). 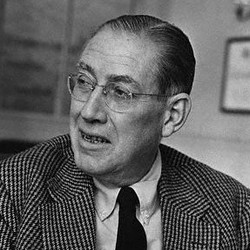 Publishing Company.  He worked very hard at this position, moving up the “executive” ladder very quickly.  In only 5 years of work, he became a well-known editor around the publishing business.  Nash then realized that his name was known all over the publishing companies; and he started to compose works of free verse. Mindscape Complete Reference Library CD stated that 1931 was the greatest year of Nash’s life. In June, he married Frances Rider Leonard of Baltimore, Maryland.  Also in 1931, he published two books of free verse: “Hard Lines” and “Free Wheeling.”  Contemporary American Poets made an interesting statement on these first two books by Nash: “These two books show poetry of remarkable freedom of scansion (rhythm pattern) and uncoventional feelings of thoughts.” Contemporary American Poets showed clearly that Nash “paved” the way for authors of free verse with absolutely no pattern.

After working on other poetry books such as Happy Days (1933), The Bad Parent’s Garden of Verse (1936), and I’m a Stranger Here Myself (1938), Nash retired from his job at Doubleday to focus all of his time on writing free verse.  He went on to write many poems, all being free verse.  Some were serious, but most of them were humorous.

Microsoft Encarta 95 said that Nash also wrote the musical comedy One Touch of Venus (1943) in collaboration with the humorist S. J. Perelman and the composer Kurt Weill. Contemporary American Poets stated that Nash had blond curly hair, glasses, and was adept at reciting his unpublished verse. Ogden Nash was the prolific producer and one of the founders of humorous verse.  He passed away in 1971 at his Baltimore home.