Harriet Beecher Stowe was a high class women, reformer, and writer in the 1800’s. She wrote many anti-slavery documents that helped reform society. You may know her as the writer of Uncle Tom’s Cabin, the best-selling book in the 1800’s about how bad slavery was.

Because of the encouragement if her husband, Calvin E. Stowe, she became one of the most famous writers, reformers, and abolitionist women 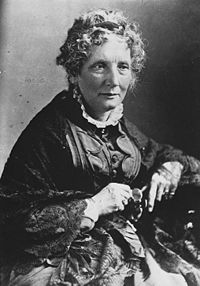 of the 1800’s. Harriet Elizabeth Beecher Stowe was born on June 14, 1811, in Linchfeild, Connecticut. Her father, Reverend Lyman Beecher, raised her in a strong, religious, abolitionist environment. She was also very well educated. In 1832, she moved to Cincinnati with her father. There she learned about slavery that was taking place in the state underneath her. In 1836, she married Calvin E. Stowe, a collage professor who encouraged her writing, that was soon to make her one of the famous women in American history. A few years later she moved to Maine because her husband was excepted into a college as a professor. Harriet Beecher Stowe is well known for her well written anti-slavery document, Uncle Tom’s Cabin. Uncle Tom’s Cabin is one of Harriet’s Most potent pieces of writing.

It was also the 1800’s best selling book. She may also be known for her other, not so famous, anti-slavery documents known as the following: Dread: the Tale of the Great Dismissal Swamp, The Minister’s Wooing, The Pearl of Orr’s Island, and The Oldtown Folks. These books may not have been her best pieces of anti-slavery writing, but it still helped influenced many people into going against slavery and trying to stop it. Harriet Beecher Stowe may be significant because she wrote Uncle Tom’s Cabin, but she is significant in other ways. Back during the time of slavery no one would listen to what an African American would have to say, let alone an African American slave. It was very odd in that time to be a rich, high class woman and not own a slave. But, because of the encouragement of her husband, and the way she was raised as a child she was against slavery, and she tried to reform society. By her writing ability and knowledge of slavery she wrote anti-slavery documents that almost every northerner read. The pieces of work influenced many people.

A lot of people would try to stop slavery, just as Harriet would. If Harriet Beecher Stowe wouldn’t have written her stories people probably wouldn’t have been as influenced, and society today wouldn’t be the same. Harriet Beecher Stowe was one of the most famous abolitionist woman of the 1800’s. She was a high-class women who greatly influenced people in her writing on anti-slavery. She wrote many other anti-slavery documents that influenced many people into becoming abolitionist and reformers of society. Her husband and father were a great influence on her writing. Harriet Beecher Stowe is well known for her masterpiece, Uncle Tom’s Cabin which was the best selling book of the 1800’s.