Jonas Edward Salk was born to Polish-Jewish immigrants, Daniel B. and Dora Salk, on October 28, 1914. Dr. Salk was born in upper Manhattan, but then moved to the Bronx where he went to school. “His first spoken words were, ‘Dirt, dirt,’ instead of the conventional, uninspired ‘No, no’ or ‘Momma.’ He was a responsive child.” Dr. Salk was “raised on the verge of poverty.” Although his family was poor, he did do exceptionally well in all the levels of education. He graduated from Townsend Harris High School in 1929 and then went on to the College of the City of New York where he received his B.S. in 1934.

He finally earned his M.D. degree in June of 1939 from the New York University College of Medicine. Jonas Salk was “a somewhat withdrawn 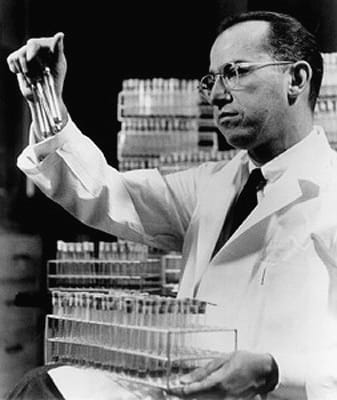 and indistinct figure” but was always reading whatever he could lay his hands on. Dr. Salk went on to intern for two years at Mount Sinai Hospital in New York. He then moved on to the University of Michigan in Ann Arbor as a research professor in the Department of Epidemology. It was here that he found a vaccine for influenza, commonly called the flu, while he worked with Dr. Thomas Francis Jr. In 1947, when the University of Pittsburgh expanded, he went to work there with a part in his contract that said he could go back to Ann Arbor if things didn’t work out, no questions asked. At this school he became what he is known as today, a bacteriologist. It was here that he developed the polio vaccination. Dr. Salk then left his field of endeavor because of all the fame and ridicule from his colleagues. In 1963, Jonas Salk set up the Salk Institute for Biological Studies in La Jolla, California. This facility was made possible through funds from the March of Dimes.

“Poliomyelitis, commonly known as polio, is an acute viral infection.” Polio is the “inflammation of the gray anterior matter of the spinal cord.” The inflammation would destroy the nerve cells.

As a result of the lost nerve cells, the muscles that those nerve cells controlled would no longer be functional. Polio has long been a disease in this world. Mummies with one leg shorter than the other, and a memorial that shows a priest with one leg withered are two examples of ancient artifacts possibly proving the polio virus’s existence as far back as 1500 B.C. The first written record of an outbreak of polio is in 1835. It occurred in Workshop, England with the record stating, “Four remarkable cases of suddenly induced paralysis, occurring in children…” Nevertheless, it was not until 1916 that the United States became well aware of the polio dilemma. In that year, there were 27,363 cases of polio with 7,179 resulting in death. Unfortunately, the problem didn’t go away; in New York City there were 9,023 cases with 2,448 deaths. “The epidemics peaked in the United States from 1942 to 1943,…In 1950, there were more than 33,000 United States cases.” The state of Florida was one of the many states that were hit hard with polio. The director of the Florida Department of Public Health, Dr. Wilson Sowder, said, “I have not seen a communicable disease that has disrupted a community…as this has.” The disease “was communicable as an intestinal virus that would spread from the stomach to the nervous system.” It was “transmitted in fecal matter or in secretions of the nose and throat, the virus enters its victim by way of the mouth…” It was not only the fact that it was so easy to get that made it terrifying, but it was the effects the disease had on its victim. There would be those that somehow recovered completely, yet that was not the usual. Some would die, others would not be able to use their legs or both their legs and arms. Even more staggering, there were those that could only move an arm, or just their fingers and eyes. “Some would remain in an iron lung–a great, 1,800-pound casket like contraption…The iron lung hissed and sighed rhythmically, performing artificial respiration by way of air pressure”, said Charles L. Mee.

During the summers in Florida, kids would not be allowed to go to the movies or to the pools because of the parents’ fear of them contracting the virus. Due to the consequences, polio “aroused as much alarm in that era as does AIDS today.” Finally, on April 12, 1955 it was announced that Dr. Jonas Salk, using a technique reported by Dr. John F. Enders in 1949, had discovered a cure that could be depended upon to immunize humans from polio. “Overnight, Jonas E. Salk was a hero,” said Kathleen Arsenault, a librarian at the University of South Florida at Bayboro.1 Everyone was so relieved that a vaccine had been found that they “observed moments of silence, rang bells, honked horns, blew factory whistles, fired salutes, kept their traffic lights red in brief periods of tribute, took the rest of the day off, closed their schools or convoked fervid assemblies therein, drank toasts, hugged children, attended church, smiled at strangers, forgave enemies.” It “consummated the most extraordinary undertaking in the history of science.” Although Dr. Salk tried to take no credit for what he and his fellow workers had accomplished, the public ignored his words and gave all the credit to him. Jonas Salk “awakened that morning as a moderately prominent research professor on the faculty of the University of Pittsburgh School of Medicine. He ended the day as the most beloved medical scientist on earth.” Dr. Salk did not patent his vaccine, therefore, he did not receive any royalties for it, though he could have been a millionaire. As it was though, he received many tokens of gratitude. “The ardent people named schools, streets, hospitals, and new-born infants after him. They sent 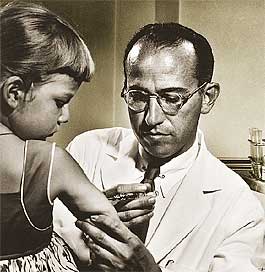 Their legislatures and parliaments passed resolutions, and their heads of state issued proclamations. Their universities tendered honorary degrees. He was    nominated for the Nobel Prize, which he did not get, and a Congressional medal, which he got, and membership in the National Academy of Sciences, which turned him down. He was mentioned for several dozen lesser awards of national or local or purely promotional character, most of which he turned down.” Dr. Salk is thought of most for his polio vaccine, yet he is the scientist who invented the flu shot. The flu virus is an illness that affects the digestive track, most often the stomach walls. He and Dr. Francis developed the vaccine in 1976 at the University of Michigan in Ann Arbor. That vaccine helps many people today to get through the flu season without any or little suffering.     The United States has been free of polio since September of 1991. The United Nations agency stated that this was true in all of the Western Hemisphere: the United States, Canada, the Caribbean, and Latin America. Even though the Western Hemisphere is polio free, the rest of the world is very far from it. There are still approximately 120,000 cases a year. That number is decreasing: in 1992 there were a reported 15,911 cases in a total of 58 countries, whereas in 1993 there were only 7,898 cases reported in a total of 46 countries. That is a 50 percent decrease in only one year. There was also 141 countries that reported no cases of polio in all of 1993. One organization affiliated with polio elimination is The Rotary Foundation. This group has developed a program called PolioPlus. This program’s goal is to eradicate polio worldwide by the year 2005. This goal will prove to be a very expensive endeavor; over 10 years it could cost up to as much as 1.4 billion dollars.

One event that has helped make the United States polio free is that children must have received the polio vaccination before they can enter the public school system. Everyone is working together, though, to try and eradicate polio worldwide. Japan and the United States have agreed to a joint health program for children to do away with polio by the year 2000. Although the whole world seems to be on its way to being polio free, the polio survivors are still suffering. “Nearly a third of the 1.6 million polio survivors have begun to develop puzzling ailments, such as fatigue, muscle weakness and atrophy, and in some cases difficulty breathing.” This “ailment” is known as post-polio syndrome. The theory behind this problem is “the initial viral attack kills a number of motor neurons and weakens some of the surviving nerve cells. As the post-polio patient ages, these damaged neurons increasingly lose their connections to muscles, which stop responding.” Other symptoms that accompany post-polio syndrome are as follows: chronic muscle pain, sensitivity to cold weather, and sleeping problems. Of all the polio survivors, ninety percent of them are predicted to contract post-polio syndrome. It has been found that from the time of the original disease to the time of the contraction of post-polio syndrome is about thirty years. Herman Oliger had to quit work because of post-polio syndrome. “Any strenuous activity would have to be followed with more than eight hours of sleep and in some cases, two days of rest.”

As a result of this debilitating illness, some people must go back to the use of leg braces or wheelchairs or even the iron lung. The only organization that has been formed to help this type of people is the Arkansas League of Polio Survivors located in Little Rock. This organization was founded by Margie R. Loschke who is a post-polio sufferer herself. It is a non-profit establishment, there are no dues, and they give moral support to those who are suffering. Post-polio syndrome is an inept thing to happen, yet there are no doctors that are capable of helping these people. “Polio hasn’t been taught in medical school since the vaccine came out, so there’s not but a very few doctors (and) therapists who know anything about polio and the polio muscles,” said Margie Loschke. As a result of the polio survivors, physical therapy was born. “And now they’ve pushed them away and forgotten all about them.” If there were to be an accident involving a post-polio syndrome person “there’d be nobody in that hospital, no medical personnel…that would know how to handle a post-polio body without injuring it,” said Loschke. Jonas Salk died on June 23, 1995 (aged 80) in La Jolla, California, United States.