Michael Moore is a writer and film director who stands up for the blue-collar, working class people. In his film, ‘Roger and Me’, he shows how these groups of people are mistreated and disregarded by the stockholders and the company chairman of General Motors. Moore shows that corporate America is the “American dream” perfected and then corrupted because of greed and the will to power.

Michael Moore was born in Davison, Michigan, just outside of Flint, in the shadow of the GM plant. His home was an apartment over a dry 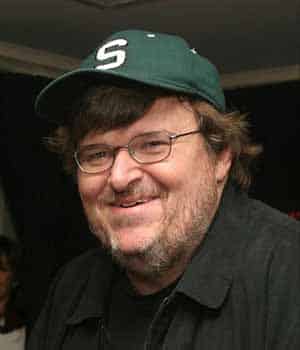 cleaner’s shop. His family moved from a small, three-room bedroom ranch house on a dirt road when he was very young. After his two sisters were born, his family moved again, this time to a small house on a paved street. He left his home at age fourteen to go to the seminary. At age fifteen, he decided that he no longer wanted to be a Catholic priest, and he quit. Later, in high school, he started a very successful life. He became an eagle scout and was elected to the school board (this was not done without a fight; he had to sue the school board because they did not want to accept a long-haired eighteen-year-old). When he was twenty-two, he founded and became the editor of the Flint Voice, one of the nation’s most respectable alternative newsletters.

In 1989, Moore produced and directed a documentary entitled ‘Roger and Me’, a political satire about his quest to convince General Motors’ Chairman Roger Smith to visit Flint, Michigan, and witness the devastation brought by GM shutdowns. His movie quickly became the highest grossing documentary of all time, appearing on more than 100 of the critics ’10 best films of the year’ lists. The film was also given many awards and even led to the founding of the Center for Alternative Media.

In ‘Roger and Me’, Moore wants answers for the plant closing and the catastrophes it has brought. He tries to interview Roger Smith in order to get the answers to these questions. The film’s guiding thread is Moore’s relentless stalking of Roger Smith from 1987 to 1989. Smith continually eludes him, never explaining his mistake. Meanwhile, in Flint, the poor are getting poorer and the rich keep getting richer. Crime rises and Flint, once home to America’s largest corporation, becomes the worst town in the US. The now-unemployed factory workers that haven’t moved, lost their mind, or committed suicide, try to survive. Some sell their blood, others try to work at Taco Bell, while still others try a group effort to survive. The citizens try to make Flint into a center for tourism and even built their own amusement park, Autoworld. This plan dies shortly after it was starts.

Roger Smith’s plan was a great one for his own gain. It probably added millions to his already unlimited supply of money. The aspect that he didn’t take to mind is the thousands of people who were destroyed by his relentless stride to earn more money. Even after closing eleven factories, he dove deeper into the pool of corruption. He started to buy weapons manufacturing companies and then he collected billions from the unions, via wage cuts.

Roger Smith, and people like him, lead to uncontrollable poverty and the overall self destruction of this country. There can be no mistaking the ironic meaning that Smith’s words take on as we see an evicted man carrying his Christmas tree out of his apartment along with his family’s other belongings. The chairman says, “We’ve listened for the jingle of bells in the country, we’ve smelled the pine needles on the Christmas tree and the turkey on the table.” These words are spoken over images of the evicted families being ejected from their homes and their Christmas tree being thrown in the trash.