Purpose: To measure the willingness of participants to obey an authority figure who instructed them to perform acts that conflicted with their personal conscience. 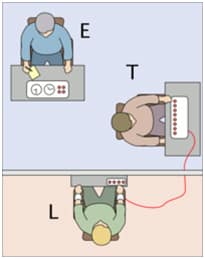 1) The participant (T) arrives at the testing facility and is “forced” into the position of Teacher. The accomplice to the experiment (L) gets the Learner position and each individual is placed into a separate room. The Learner indicates to the Teacher that he does have some form of mild heart arrhythmia before experiment begins.

2) The Experimenter (E), informs the teacher that he will be in teaching the Learner a series of binominal word phrases and will state them all successively and the Learner will have to repeat the correct match when the Teacher states the first part of the pair.

4) As the voltage increased, the Learner would complain about the shock with yelps, 9(in which the Teacher often laughed) and then would begin to pledge for mercy and to be released from the experiment. At this point many participants would question the Experimenter on whether or not they should continue and the Experimenter would respond: Please continue, The experiment requires that you continue, it is absolutely essential that you continue, you have no other choice, you must go on.

5) The Teacher would then have the choice to continue shocking the Learner or refuse to continue the experiment based on the fact that the voltage could afflict the man’s heart condition. If continued, the victim would continue to pledge, then refuse to answer and finally become unresponsive.

6) The experiment would conclude with an interview, in which the outline of the experiment would be explained; that the Learner was not actually being shocked. The Teacher would meet the Learner and the Experimenter would ask the participant about how they felt, why the stopped or continued, and if the Experimenter really controlled what they were doing.

“The essence of obedience consists in the fact that a person comes to view himself as the instrument for carrying out another person’s wishes, and he therefore no longer sees himself as responsible for his actions. Once this critical shift of viewpoint has occurred in the person, all of the essential features of obedience follow.”

The experiment demonstrated the obedience of many to authority figures, even when faced with a moral crisis. The facts that over 65% of all participants conformed to the power of authority demonstrate the change of the participants’ viewpoint of their actions during the experiment. The conclusion that they were not responsible for the Learner’s well-being, and were only being compliant with the authority figure, the Experimenter, allowed so many to them to continue though they knew what they were doing was wrong.

Pretty nice post. I just stumbled upon your blog and wanted to say that I have really enjoyed browsing your blog posts. In any case I’ll be subscribing to your feed and I hope you write again soon!