The summer of 1871 had been an unusually dry one in Chicago. Between July and October, only 5 inches of rain fell. In addition to 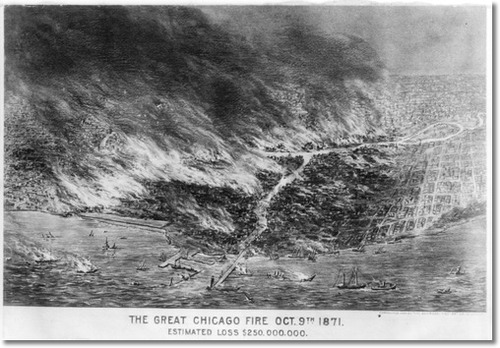 twenty-seven fires in the first week of October, on Saturday night, October 7, a blaze broke out in a planning mill on the West Side and destroyed almost every building in a four block area before it was brought under control Sunday morning. They lost a hose and other fire-fighting equipment, including one of seventeen steam fire engines and a hose cart. Nearly half of Chicago’s 185 firemen fought this fire and many were on duty all day, so they were already exhausted when the Great Chicago Fire of 1871 struck. Some people think that the fire was started by Mrs. O’Leary’s cow kicking over a lantern. Others have different theories, but one thing is for sure, on the Sunday evening of October 8, 1871 a blaze started in Mrs. O’ Leary’s barn. Daniel Sullivan sat on the wooden sidewalk when he saw a flame in Mrs. O’Leary’s barn. He managed to save a half grown calf. By now everyone in the neighborhood woke up, including the sleeping O’Leary’s. The “America” hose cart was the first to reach the scene.  They were soon joined by the “Little Giant” engine company. A neighbor ran to a drug store to turn on an alarm but the alarm failed to work. The court house watchman had given wrong directions but later tried to correct his mistake, but the alarm operator was eating dinner so she refused to correct the mistake. The fire engines went about 1 mile south of where the fire was. By the time the problem was resolved, a number of hose carts and fire engines were fighting to keep this fire under control, but the wind had spread bits of burning debris. Several homes, one block north, had caught on fire. The flames were so intense that one fireman’s   hat was warped and his clothing was smoking.

The fire spread swiftly through Chicago. Frantic householders and businessmen, whose building was in the probable path of the fire, piled all

their possessions in to the street. Both the west and south side were cover in a blanket of smoke. As Thomas Byrne of Hose Elevator No.2 said, “you couldn’t see anything over you but fire….No clouds, no stars, nothing but fire.” The north side started in flames on Monday. As people fled east to the lake, odd things were saved, such examples are: a rooster, a fire place mantle, a pack of playing cards, a stovepipe, an empty box, a feather duster, and a wooden Indian. Shortly before the court house burned down 100 prisoners were released. Most of the prisoners began looting. When the Water Works was hit by the fire, many of the firemen went home. Finally around 11P.M. the wind died down and showers began falling. The fire was over, even though many piles of wood remained smoldering. 90,000 people were left homeless and 300 people died. 2124 acres were destroyed in the raging inferno, a total of $200,000,000 in property loss. After a huge fire like this you would expect for it to take a long time to rebuild, but within a month, 4,000 new buildings were put up