The Crusades: Overview and Analysis

The Crusades were military expeditions planned and carried out by western European Christians. The crusades started around 1095. The 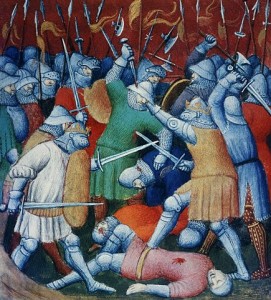 purpose of these crusades was to overtake and gain control of the Holy Land from the Muslims. The Holy Land was Jerusalem and the Christians believed that gaining control of it was their fate. The pope would gather the people together and incite them. The origin of the crusades was a result of the expanding Turks in the Middle East. These Turkish forces invaded Byzantium, a Christian empire. The crusaders were a militia, sent out to recover what they thought was theirs.  The first crusade was essentially started by Pope Urban II. On November 27, 1095, he gathered his followers outside the French city of Clermont-Ferrand. He preached to these people and told them that action needed to be taken. In response, the people cheered and planned their attack. Urban II brought together all of the bishops and urged them to talk to their friends and fellow villagers and to encourage them to participate in the crusades. Small groups started to form and each group would be self- directing. All the groups planned their own ways to the Constantinople, where they would meet and regroup. They would attack the Turkish forces in Constantinople and hope to regain control of the city.  The large Christian armies talked to Alexius I Comnenus, the Byzantium emperor, and agreed to return any of his old land that was recaptured. The armies were skeptical of this demand but agreed anyway. The first attack by the crusaders was on Anatolian, the Turkish capital. Meanwhile the Byzantians were also trying to recapture Anatolian, and later that year, the city surrendered to the Byzantians instead of the crusaders.

The Byzantians were using the crusaders as pawns to achieve their own goals. The crusaders again met and crushed the Turkish army. The crusaders scored a great victory and boosted the troops’ moral. The crusaders captured Antioch and also held off relief forces sent to help the Turks. The crusaders then moved on to their main goal-Jerusalem!  The city was under Egyptian control and was heavily guarded. The crusaders set up siege machines and called for reinforcements, finally forcing the Egyptians to surrender. Everyone in the city was massacred in the belief that the blood of the former holders purified it. The crusaders kept control of the city for the next generation or so and brought in people to inhabit the Holy Land. Slowly the Muslim forces started to rebuild and soon came back to take the Holy Land.  After the defeat of the Egyptians in Jerusalem, the crusaders started to colonize. The Latin colonists set up four states: Tripoli, which was on the Syrian coast, Antioch, centered near the Orontes Valley, Edessa, a far east state which held most of the Christians, and the Latin Kingdom of Jerusalem, the most powerful and centered between the other three states. The crusaders’ strategy during the first crusade was to isolate the Muslims and Egyptians, and to cut off any supplies or reinforcements from strengthening their status. Once the original generation of crusaders died, their children were not as determined. They forgot about the Muslims that had escaped, and because of that, the Muslims had a new leader and were regaining power. Under their leader, Imad ad-Din, the Muslims regrouped and planned their attack against the colonies. After the passing of Imad ad-Din, a new radical leader emerged-Zangi. Zangi led his troops to a victory against the crusaders and their colonies by capturing the state of Edessa. The Muslims destroyed the Christians churches, buildings, and killed the crusaders. Back home, the Pope saw what was happening and declared a second crusade to recapture the territory that had been lost. King Louis VII, from France, set out to meet Conrad III army. The Holy Roman Emperor, Conrad III, set out from Germany and soon met up with Louis’ men. With their armies, they left from their homeland to meet in Jerusalem. Conrad’s army began their voyage, only to be ambushed. Afterwards, their supplies and cavalry were drastically depleted. The better half of the French army reached Jerusalem and met up with the small remains of the Germans and the old crusaders. Together they ventured to Damascus, but failed to take the city and were badly defeated. The French army and king had had enough and returned home. The small remnants of the Germans stayed with the colonies, along with the old crusaders. Slowly but surely, the states the crusaders had set up were systematically being destroyed. The failure of the second crusade brought on the third crusade.  The Muslims had 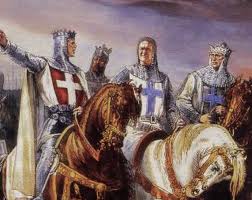 named a new leader, Nur ad-Din, who regrouped the Muslims and motivated them to take back what believed was theirs. Their leader died a few years later, and was succeeded by their military leader, Saladin. In 1187, Saladin took his now revived and recuperated army to recapture Jerusalem. In July, he crushed the crusaders front line army in Galilee. Saladin then led his troops throughout the area of Jerusalem and finally took Jerusalem in early October. This led to Pope Gregory VIII starting a third crusade. The people in the west knew that their time had come to defeat the Muslims once and for all. Included in the ranks of men going on the crusade were Fredick I, the Roman emperor; Philip II, the French king; and Richard I, of England. These forces were thought to be one of the most powerful armies assembled during the middle ages. Again, this crusade suffered misfortune.

On his journey to Jerusalem, the Roman emperor died, and his army accompanied the body back home for burial. Even with the size of Richard’s and Frederick’s remaining armies, they were not able to recapture Jerusalem. When the armies left Jerusalem and its surrounding areas to return home, they accomplished none of their goals.  Since none of the following crusades were successful or even important, not much is known about them. The later crusades also provided almost nothing for the Christians therefore much time and money was wasted on them.  It established a routine and thereby structure for their lives. Towards the end of the second or the third crusade, the common folk were becoming angry with the Pope and kings for their lack of results. Monies went into the preparation of the crusades with minimal return. The first crusade set a great example for the others, yet the next crusades didn’t follow the same path. The later crusades lacked organization. No one wanted to provide leadership due to the uncertain outcome. Leadership demonstrated in later years was from Stephen and Nicholas in the Children’s Crusade, however unfortunately young children were used in combat. This was a reflection of the moral character or lack of it, in their leaders and subsequently contributed to their failure.