The Hebrews viewed war as a holy act. War was thought of in this way because they believed that it was God’s will that they fight and that they would win if he wanted them to. 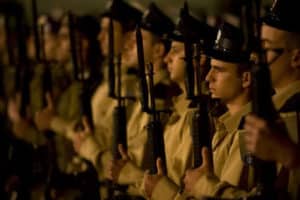 Hebrews. Military service was viewed as a religious obligation so men would always be willing to serve in the army. Before they established a full time army the Hebrews also relied on mercenaries and bandits to help them fight.

When Saul became king he saw that it was necessary to set up a full time army. He gathered all of the men he could find into an unorganized group. Later, Solomon turned the army into a large highly organized group. Solomon also set up a recruiting office so that in times of danger temporary help could be gotten in addition to the regular army. However, by 700 B.C. the citizens army had replaced the regular army because there was no need for a regular army with the tremendous amount of volunteers.

The Hebrew’s army consisted mainly of their infantry which served as the backbone of the army. The infantry was equipped with only bronze helmets and coats of mail also made of bronze. Bronze was the metal that was chiefly used in the Hebrew’s armor even though iron was discovered to be much stronger. The infantry was equipped with either swords, or lances for hand to hand combat, with lances being the weapon of choice. Either bows, slings or spears were used for artillery with bows being used much more than slings or spears.

Because the Hebrews believed that war was a holy act the Hebrews had to prepare for the battle spiritually as well as physically. Before every battle sacrifices were made accompanied by prayers. Before any campaign was started a priest would be consulted on the precise time for which the campaign would be started. The priest would also be brought along on the campaign so he could be consulted at crucial points during the campaign. All of these were done to gain God’s will and determine his wishes.

The main form of battle the Hebrews engaged in was siege warfare. They first would attempt to capture the city’s water supply. Once they controlled the water they would cut of the supply of food from outside the city. Once they had accomplished these they would wait for months and sometimes years. This would cause the city to resort to its stored food. Once the stored food ran out, people died of malnutrition, paid high prices for food on the black market, or resorted to cannibalism. This method of battle proved to be highly effective for the Hebrews.

The reason for much of the Hebrews success was their attitude toward war. Because of their belief that war was holy they got an enormous amount of support from their people. Also, believing that the result of the wars they were fighting was determined by what their God wanted had to have given the Hebrews some hope even when they were losing. Without their attitude towards was the Hebrews would have been a much weaker opponent.