Trading between Canada and Jamaica

Canada and Jamaica enjoy close, longstanding, and historic bilateral relations that include hemispheric and international cooperation, security and defence cooperation, trade and investment links, official development assistance, tourism, and a large Jamaican community in Canada estimated at 230,000 people. Canada and Jamaica cooperate within the Commonwealth, the United Nations and the Organization of American States. Canada co-sponsored the Caribbean Community resolution in the United Nations General Assembly commemorating the 200th anniversary of the abolition of the trans-Atlantic slave trade, adopted in 2007. Jamaica has signed and ratified the Ottawa Landmines Convention.

Discussions are underway between Canada and the Caribbean Community (CARICOM), which Jamaica is a member of, aimed at achieving a 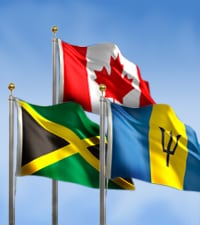 The Canadian Forces have enjoyed a productive 45-year relationship with the Jamaican Defence Force. Recently, Canada has assisted Jamaica in the construction and development of the Jamaican Military Aviation School. The school will provide helicopter and fixed-wing aircraft training to pilots throughout the Caribbean. Defence cooperation also includes pre-deployment training for Canadian Forces’ engineers and as they assist Jamaican Defence Force in improving security infrastructure.

Canada is also a key international partner for Jamaica in its efforts to fight crime and violence through a range of capacity-building programs, including cyber-security, maritime border security, and anti-money laundering techniques. In the context of Cricket World Cup 2007, Canada provided Jamaica and other Caribbean countries with specialized assistance in the areas of border security and public health.

Canada and Jamaica continue to increase academic cooperation through a variety of scholarship programs. In 2008, 326 Jamaicans received student permits to study in Canada. Jamaican applications for student permits had an approval rate of 92%.

Canada also supports Jamaican efforts in response to natural disasters. In 2007 Canada provided close to $1 million following Hurricane Dean. This included a contribution to the International Federation of the Red Cross and an airlift of 32.4 metric tonnes of relief supplies to the Jamaica Red Cross, as part of the $2 million allocated to countries affected by the hurricane.