What is Borderline Personality Disorder?

Borderline personality disorder “is defined in the DSM IV, a manual used by psychiatrists to diagnose all mental disorders, as an 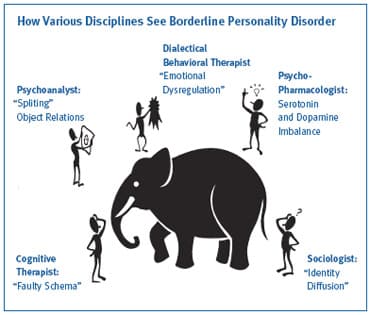 AXIS II disorder which has symptoms of impulsively and emotional dysregulation” (Livesley 146). People with BPD have feelings of abandonment and emptiness, and have “frantic efforts to avoid abandonment, going to extremes to keep someone from leaving” (Burger 300). He or she is emotionally unstable and forms intense but unstable interpersonal relationships. They show impulsive behavior, such as spending money, sex, eating and substance abuse. Borderlines engage in self-manipulating behaviors and recurrent suicide attempts and thoughts. “Their behavior can be seen as maladaptive methods of coping with constant emotional pain” (Livesley 144). “Personality includes those aspects of a person’s thinking, moods and behavior which affect his or her relationship with others” (Livesley 98). Differences in personality style (traits) add color and variety to relationships but may become too extreme, inflexible or maladaptive, significantly impairing a person’s ability to function. When a person is not able to deal with people or problems of the environment, he or she is said to have a Personality Disorder (Livesley 99). “Originally the term borderline was used to refer to individuals whose adjustment was on the borderline between normal and psychotic” (Holmes 393). Today borderline personality disorder is primarily marked by instability, showing different symptoms at different times. Most of the symptoms revolve around problems of mood, mild disturbance in thought processes, and impulsive self-injurious behavior (Holmes 393). All of this prevents the borderline to have interpersonal relationships. Individuals with the borderline personality disorder tend to have intense relationships that are very unstable. “Frequent interpersonal conflict, unstable, stormy relationships are characteristics of a borderline; Relationships usually have “love and hate characteristics” (Durand 334). Individuals with this disorder do not simply drift in and out of friendships, but instead show abrupt, frequent and dramatic changes between “intense love and equally intense hate” (Durand 334) in any one relationship. The fluctuations in their mood, involved with their anger; involved with their thought disturbances, and mixed with their paranoid thoughts about betrayal and abandonment by others; as well as their impulsiveness make it difficult to maintain relationships with others. Borderlines have problems with their mood. Their mood is not manic, but alternates between normal and flat to moderate or severe depression (Livesley 150). These individuals also go through periods of intense anger that can interfere with effective social functioning. Persons with borderline personality disorder are very vulnerable, and usually over-react to stress.

These individuals usually form unstable and intense ‘love-hate’ relationships, either a person or situation is “all-good”, or if any 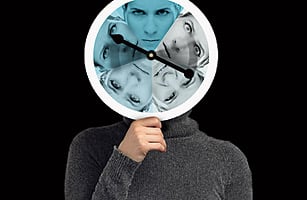 problems occur, “all-bad'” (Durand 273). “The borderline’s anger usually alienates a relationship yet the borderline will make frantic efforts to avoid real or imagined abandonment” (Burger 299). People with BPD angrily fear the abandonment of their friend or loved one and have episodic angry outbursts in fear that the person might abandon him or her. Recent research has shown that medications can significantly relieve the suffering of borderline patients when used in combination with psychotherapy (Livesley 145). Individuals with the borderline personality disorder experience thought disturbances. The thinking of a borderline show to have “unusual perceptions” that include illusions, “a mistaken or distorted perception” (Chaplin 220), and depersonalization, “a pathological condition in which the individual experiences a feeling that he or his body is unreal” (Chaplin 122). Individuals with this disorder show to have “black – white thinking, difficulty seeing the “gray” in situations or compromising.” (Durand 139). “The instability of mood, thoughts, interpersonal relationships and behavior that is characteristic of the borderline personality disorder has led some theorists to believe that individuals with this disorder have a problem with identity” (Holmes 222). Identity is “the individual self” (Chaplin 218). That is, the instability reflects the lack of any real sense of self or self-direction, and indeed these individuals report a feeling of emptiness (Durand 144). Individuals with BPD show self-mutilating and suicidal behavior. The self-mutilating is a serious symptom but not well understood. It involves “burning of one skin with a cigarette, carving up one’s body with a razor blade, making deep scratches with the finger nails, sandpapering the skin or pouring acid on oneself” (Durand 147). This behavior does not seem to want to result in death but self-mutilation is often done to feel or experience themselves as real (Durand 147). “Stress related dissociate symptoms such as paranoia; feeling as if they are losing touch with reality; feeling victimized; unable to accept responsibility” (Burger 562) can also cause a borderline to mutilate himself. The suicidal behavior stems from the feelings of depression and impulsively. Intense emotional instability, rapidly changing short-term moods and anxiety, chronic feelings of emptiness, sadness or depression may all lead to suicide attempts, or brief psychotic episodes.

The borderline personality disorder is diagnosed most frequently in women than in men (Livesley 156). One question in the research of borderline personality disorder is whether this is one disorder or a combination of schizophrenia and a mood disorder. One argument by Livesley is that the borderline disorder may be a “low-grade” combination of schizophrenia and a mood disorder that is further complicated by problems with impulse control. BPD is estimated to affect 2 – 3 % of the general population, 11% of the patients seen in outpatient clinics and as many as 20% of the hospitalized psychiatric patients (inpatients)(Livesley 157). About 8 – 10% of the people with this disorder die by suicide. “BPD, difficult to diagnose, is often misdiagnosed as schizotypal or schizo-affective disorder, depression, bipolar disorder or anti-social personality disorder” (Burger 600). BPD plays a major role in many issues of public health such as substance abuse, domestic violence, gambling, shop lifting, sex addiction, AIDS, homelessness, child abuse, and adult and adolescent suicides. A significant number of people with BPD can be found in prisons or jails (Burger 600). Those with BPD are heavy users of mental health services because of frequent hospitalizations and emergency room visits due to suicide attempts. Brief use of anti-anxiety medication may be required to relieve the episodic, intense anxiety of borderline patients (Livesley 144). “Latest research indicates that BPD is a biologically based disorder of the emotional regulation system which may be due to genetic, the environment or a combination of these two factors” (Livesley 150). These biological “vulnerabilities” may place a person at increased risk for developing BPD given certain developmental factors such as prenatal stresses, infections, nutritional deficits or stressful events in the early family environment (Livesly 160). Other family members may often have BPD, Major Depression, Bipolar Illness, or problems with addiction that may affect a person’s personality. “Serotonin, a chemical messenger (neurotransmitter) in the brain, that is important in regulating mood and aggressive, impulsive, and suicidal behavior” (Livesley 162). Abnormal levels of serotonin in the brain may impair the ability to control one’s impulses and increase the chance of suicide (Durand 150). “Dopamine, a neurotransmitter in the brain, is involved in regulating awareness of the environment and other higher information processing tasks” (Livesley 165). Abnormal levels of dopamine in the brain may make it difficult in relating to other people, social isolation and sometimes in distorted perceptions of the world (Durand 150). Medications may reduce symptoms of depression, anxiety, irritability, and paranoid thoughts. “A single “one-size-fits-all” medication for BPD does not exist yet (Burger 603). Symptoms can be reduced with monitoring of the medication and psychoanalysis of the patient because the symptoms of a borderline are constantly changing. “Recent research studies have demonstrated the effectiveness of individual cognitive behavioral therapy along with group psychoeducation and skills training that teach emotional regulation skills, distress tolerance, improved interpersonal relationship behaviors and awareness (mindfulness); This, combined with careful medication management, may allow the patient to achieve significant progress” (Burger 603).

When taught skills to regulate their emotions and tolerate distress, people with BPD can do better. Traditional psychotherapy, a long-term process, may have uncertain results. It is important that the person with BPD be motivated to change life long ways of behaving and “be able to tolerate uncomfortable feelings during treatment where new problem solving and communication skills are taught” (Burger 604). “Patients with BPD are currently the most stigmatized in the mental health system” (Livesley 111). Apparently the greatest sin a client can commit is poor response to treatment. Borderlines are very inconsistent when in treatment and for this reason many doctors choose not to treat these individuals. Recognizing signs and symptoms is not always easy. Sometimes symptoms can go unnoticed or are misunderstood. “Persons with BPD may often be thought of as manipulative or as attention-seeking (Burger 134). They can sometimes “act as if” they are okay. “People with BPD need validation and acknowledgment of the pain they struggle to live with as well as compassion without blame or judgments (Durand 99). Family members should always take suicidal statements and threats seriously and alert a mental health professional as soon as possible. “Education for family members cannot be stressed enough (Durand 99). Families need to learn all they can about BPD so that they can advocate for appropriate treatment for their loved ones. Informed families are then better able to deal with the stigma often encountered from mental health professionals. Instability might not even do borderlines justice, (Burger 199) chaotic is the best word to describe the life of a borderline. Their lives are intense their friendships abrupt. BPD is extremely painful to the patients, their families and to society. People with BPD experience intense emotions and are very vulnerable. They are among the most intensive and extensive utilizes of mental health services.