The author of the book travels on what he terms “the six journeys.” On these “journeys” he encounters different cultures, as he travels 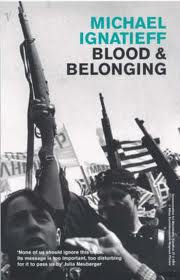 to six different coinciding areas of the world. He examines the unique expression of nationalism that each populace displays by interviewing various members of that particular society. The six areas that he travels to are specifically chosen for the clarity which nationalism is expressed in society. Nationalism is a factor contributing toward both present possible future instability in these areas. These areas are former Yugoslavia (specifically Croatia and Serbia), Germany, Ukraine, Quebec, Kurdistan and Northern Ireland. According to Ignatieff, in Croatia and Serbia there is a desire for a separate identity between the two nations. The fear of losing one’s national identity has caused ethnic hatred. A terror so strong and historically persistent, it has driven people to a desperate state to do anything. This is a large contributor to the reasons for the extreme violence present there today. The author states, “A Croat, thus, is someone who is not a Serb. A Serb is someone who is not a Croat.” This quotation profoundly expresses the short-sighted mentality present in their conflict. In his travels in Germany, the author points out an important question. Does the nation make the state, or the state the nation? This question by far does not stop here, especially when Germany is the subject. The essence of the German people is seen by some as aggressive and offensive, thus the existence of the German problem. If the nation makes the state then Germany will always be a threat. If the state makes the nation, then the aggressive nature of the German nation, which lead the world into two global wars, can be harnessed and redirected. The question has its roots and answers in the recent reunification of Germany. The Ukraine is concerned with not being Russian. It is here Ignatieff receives a complete vision of what nationalism is. He states, “I understand what nationalism really is: the dream that a whole nation could be like a congregation; singing the same hymns, listening to the same gospel, sharing the same emotions, linked not only to each other but to the dead buried beneath their feet.” Quebec is a model that presents a possible future of the state system. Ignatieff uses the example of Quebec to illustrate the relationship between nationalism and federalism. He implies that “if federalism fails in Canada it can fail anywhere.” If the balance between “ethnic and civil principles” is not maintained in Canada, who is not an impoverished country and has a large, successful economy; then perhaps the modern world has not transcended the grasps of nationalism. The Kurds represent a nation without a state, who find themselves surrounded by other nations who are more aggressive nationalists. The term Kurdistan is a definition of the areas used by Ignatieff to explain the area of major Kurdish populace concentration. There is no real borders, no flag, no government and Kurds must acknowledge the state in which they reside (i.e., – Syria, Turkey, Iran and Iraq), of which, is not Kurdistan. Finally, the sixth journey ends in Northern Ireland. He makes the observation that this is the ideal place to conclude his project. Northern Ireland contains a recurrence of the themes that seemed so prevalent in the other journeys. In Ireland ethnicity, religion and politics are all bound into one expression or identity. These are also evident in the five previous studies. Is Michael Ignatieff’s work relevant? The answer to this question is, yes it is. The issue is important. Nationalism presents itself as a phenomenon. The questions of why people need to retain a cultural identity and the way they go about preserving it is still unanswerable. Evermore unfathomable is the violence permeated through nationalistic expressions, which are “necessary” by the parties involved.

The very existence of the enigma created by nationalism dictates the need to explore the subject in more depth. The situations in the book are not isolated events. Nationalism exists in every state all over the world. There is a dichotomy presented by Ignatieff between nationalism and federalism. He explains the political doctrine of nationalism by stating “(1)that the world’s peoples are divided into nations, (2) that these nations should have the right of self-determination, and (3) that the full self-determination requires statehood.” Federalism, though not a particular ideology, is a means of sharing political power among different peoples within a state. The various systems of government which fall under the definition of federalism are not problematic to the people; unless, of course, they are not completely legitimate. If the government is illegitimate, then ideally nationalism steps in to demand a completely self-determined government, which renders proper representation to its populace. Despite the diversity of a state’s population, theoretically, harmony is maintained since the people are properly represented or controlled. This situation with variation is experienced throughout the world. States are dynamic, also their government and populace. If the dynamics of the government or the state do not keep up with the pace of change in the populace, then instability will rise in the name of nationalism and shake the very foundation of the state if left unchecked or not placated. The method used by the author of the book was personal interviews with both prominent people and the normal everyday person in the areas visited. He also uses descriptions on the surrounding areas to accent the point of discussion. His intent was to objectively take the reader on a stroll through the areas he visited. Through his style of writing, he allows the reader to sit in on his interview by highlighting specific questions and the responses that take place in his conversations. Finally, he creates visual images that he had viewed as ironic and analogical in support of his observations. Ignatieff comes to the conclusion that nationalism is not the problem of this world. Continuing, he goes on to say that when one loses their individuality to become a “patriot,” that is where the danger lies. Being yourself is something that ethnic nationalism does not allow. Political ideologies can become blinding to its possessors. At the beginning of the book mentions that he is a liberal.

The traveling and experiences did not change that at all. He notes the importance of “liberal virtues – tolerance, compromise, reason,” but concludes in an observation about how these virtues are opposing human nature. Ignatieff addresses the violence factor that surrounds nationalism like a plague, concluding that, nationalist rhetoric is an excuse to commit acts of violence. He observed that most of the violence is performed by young men between the ages of 18 to 25. His explanation is that the liberal mind set forgets that not everyone hates violence. He also says that there exists in males a basic loathing of peace. Human nature is the reason for the violence or Ignatieff thinks that it is specifically male human nature. I personally enjoyed the book and found it to be interesting reading. It had the aspect of a novel without losing its academic nature. Michael Ignatieff’s writing style was creative and supported his observations well. He portrayed the destruction that he found in his journeys in a way that allowed the reader to experience the same despair and hopelessness of seeing it first hand. Another interesting perspective that the author added to the book was his own identity. He traveled to places that he had either lived at or where his family originally came from. His family roots add a personal touch that would otherwise have been left out. Religion and its role in society are important concerning nationalism. It is in this author’s opinion that religions not be viewed as a secondary facet to nationalism. The Islamic uprisings in France and the peace talks in southwest Asia between Israel and Syria are two different perspectives to the argument. Claude Barreau, advisor to the minister of interior in France says, “Foreigners arriving in France . . . now have a new fatherland. Islam has a place in France, provided it is willing to stay discreet as the other religions. But Islamist are coming as colonizers.” This illustrates an underlying principal that splits Europe down the middle. France is a representation of Europe according to the late Charles De Gaulle. France has adopted internal policies to control the growth of Islam by limiting both social expressions of that faith and by specific immigration procedures. Are not the three million plus population of Muslims in France entitled to nationalistic expression of their identity as French Muslims? Where does that leave the Bosnian Muslims, the Turks or any other non Christian state located near or inside Europe? The second point deals with Israel and Syria. The two countries have been at odds with each other since 1947 when Israel was recognized as a state. The main reason for the clash is the difference of religion, not national identity.

However, both countries have evolved since their beginnings and have strong nationalistic tendencies. Both countries are now leaning toward compromise rather than a holy war. As the talks continue for the return of the Golan Heights to Lebanon the Moslem Jew factor still remains tense. Of the recent peace talks is the strip of land called the Golan Heights in north of Israel. Avoiding an attempt to explain an extremely complex situation or to oversimplify the matter, it is a fact that many heads of state in the region are choosing political solutions to old religious problems. However, the foundations of their society are religions, to be specific Islam and Judism. This religious factor will never cease and always cause instability in the region because of fundamentalism present on both sides. In conclusion, the subject of the book, Blood and Belonging, has been discussed. The relevance of the book’s theme was examined along with the authors methods and style of writing. This critique also addressed the conclusions drawn by Michael Ignatieff concerning nationalism and its expressions in the world. Perhaps the world will always have to deal with the dichotomy discussed in this paper, however one can only hope that a long lasting solution will be found.