In 1839, Sengbe Pieh, who later became known as Cinque, was captured and taken as a slave. He was sold several times until eventually he 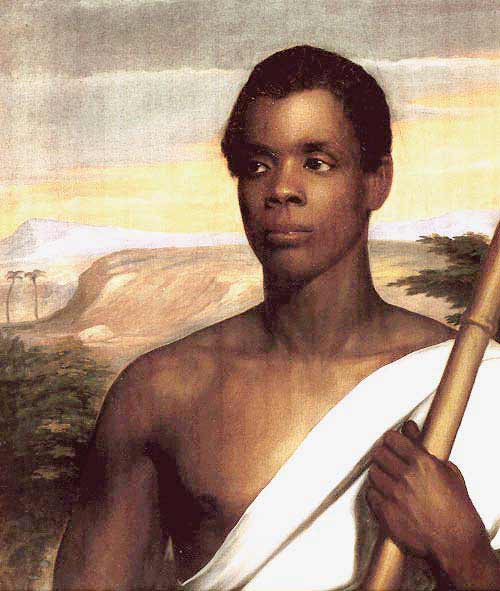 comes into the hands of Spanish slave traders. Even though at that time, every European nation had signed treaties declaring slaves were no longer to be taken from Africa, the profits were so large that many Europeans flouted the laws. Cinque and the rest of the slaves then are loaded onto the ship and carried across the “middle passage” to Cuba where they are sold to new masters.

It is there that the Africans have their names changed to conceal the fact that they were not born into slavery, but freed men and women who were kidnapped into bondage. In Cuba, fifty-three Africans board the Amistad which is bound for their owner’s plantation near Puerto Principe. Rations are cut due to delays, and the Africans are subjected to beatings and starvation. During a storm, Cinque uses a nail he found to work free the lock holding his iron collar on. After he frees himself, he then unlocks his comrades. Cinque then has the Africans are themselves with knives being stored in the cargo hold. Early the next morning, the Africans attack, killing all the crew and passengers except for two who they command to sail the ship back to Africa. The Spaniard did everything they could to delay the trip, hoping to attract attention from other ships.

Eventually the Amistad sails into New England waters where it is captured by an American warship. The Africans are then placed in jail until the disposition is decided upon. Abolitionists take up their cause, teaching the Africans English and how to read. Spain immediately demands that the Africans be turned over so that the Africans can be tried for piracy. The U.S. courts refuse to extradite and a lengthy court battle begins. The U.S. administration backs the country of Spain while the abolitionists do everything they can to raise support for the Africans. When District Court Judge Judson determines that the Africans were to be returned to Africa, the White House and Spanish authorities immediately appeal. Eventually, the case comes before the U.S. Supreme court where John Quincy Adams joins the defense team. The Supreme Court upheld the district court’s decision that the Africans were illegally enslaved, and therefore entitled to fight for their freedom; however, the U.S. administration refused to finance the trip back to Africa. The necessary money was raised by the Amistad committee and the thirty-five survivors were returned to their home country.