Colonel T. E. Lawrence, known as Lawrence of Arabia, was a guerrilla leader in the Arab Revolt of 1916-18, which expelled the Turks from 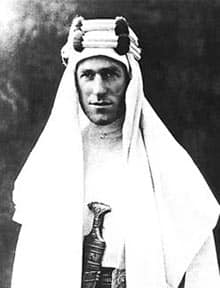 western Arabia and Syria during World War I. Lawrence was an aloof, complex, versatile, somewhat arrogant genius, and his exploits made him a popular, if enigmatic, hero in the Western world.

Thomas Edward Lawrence was born at Tremadoc, Wales, on Aug. 15, 1888. His father, Sir Thomas Robert Chapman, was an Anglo-Irish landholder who left his wife for his family’s governess. Thomas was the second of five sons produced by this union. Adopting the name Lawrence, the family settled in Oxford, where Thomas eventually entered the university. Specializing in archaeology, architecture, and history, he began learning Arabic when he visited Syria and Palestine. After graduating in 1910, he worked as an archaeologist in the Middle East until early 1914.

After the outbreak of World War I, Lawrence returned to Egypt in December 1914 as an intelligence officer. In October 1916 he accompanied a British mission to aid Husayn ibn Ali of Mecca, who had launched the Arab Revolt against Ottoman Turkish rule. Shortly thereafter he joined Husayn’s son and army commander, Faisal (later King Faisal I of Iraq), as an advisor. Together, Faisal and Lawrence proceeded to push back the Ottoman forces by raiding the Damascus-Medina railroad and overrunning Ottoman strong points. In October 1918 the Arabs took Damascus, and Lawrence returned to Britain.