“If the first woman God ever made was strong enough to turn the world upside down all alone, these women together ought to be able to turn it back, and get it right side up again! And 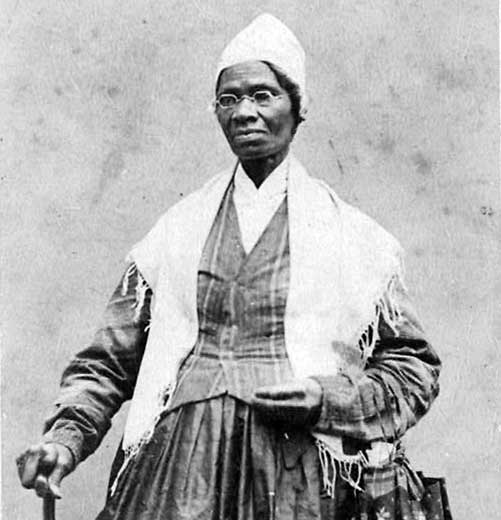 now they is asking to do it, the men better let them.” Best known for her “Ain’t I a Woman” speech, Isabella Baumfree, otherwise known as Sojourner Truth, was an abolitionist as well as a women’s rights activist. After escaping slavery with her youngest child, Sophia, she devoted her life to advocating for African-American and women’s rights. Although she was never formally educated, she rose to be one of the most inspiring promoters for human rights.

Isabella Baumfree was born in Ulster County, New York in approximately 1797. Her exact date of birth was not recorded; this was not unusual for children born into slavery. According to Biography.com, Truth was of the youngest of twelve children of James and Elizabeth, Mau-Mau Bett, Baumfree. Her family was owned by Colonel Hardenbergh and lived on his plantation in Espouse, New York. It should be noted that the area was once under Dutch control, resulting in Truth’s first language being Dutch. After the Colonel passed away, ownership of the Baumfrees was passed onto his son, Charles Hardenbergh. However, after Charles’ death, the Baumfree family was split up. Truth was sold at the age of nine at an auction along with a flock of sheep for a mere hundred dollars. In 1808, Truth was sold to Martinus Schryver. She would be sold once more two years later, eventually landing under the ownership of John Dumont in West Park, New York. Because her native tongue was Dutch and slave holders did not care to educate their workers, Truth did not understand what was being spoken to her when her owners spoke in English. On account of this, she was often punished with beatings. For this reason and others, she learned to speak English.

At the age of 24, Truth had a romantic relationship with a slave named Robert, who lived on another plantation, with whom she wished to marry. Together they even had a daughter named Diana. Even so, Robert’s owner forbade the relationship because any children that Truth were to bare would be under the ownership of John Dumont, Truth’s owner, not his own. As a result, Dumont forced Truth into marrying a man named Thomas from another plantation, three years after her unsuccessful relationship with Robert. She bore three of Thomas’ children. Their names were Peter, Elizabeth, and Sophia.

In 1817, New York, as well as other northern states, began debating the abolition of slavery. Ultimately, New York would emancipate all slaves born before July 4, 1799 on July 4, 1827. Dumont promised Sojourner he would give provide her with her freedom one year before the abolition of slavery in New York. When Dumont did not fulfill this promise, Truth escaped with her youngest child, Sophia, leaving her husband and other children behind. Several drastic changes took place in her life consecutively after her escape. For one, it was during this time that Truth found asylum with Isaac and Maria Van Wagenen. The Van Wagenen’s purchased Sojourner from John Dumont and provided her with her freedom. Secondly, Truth would find herself deeply connected to her religion, which would later be the cause for her motivation in fighting for the rights she deserved. Shortly after her escape, Sojourner realized her five-year-old son, Peter, had been illegally sold to a southern man in Alabama. Consequently, Truth sued John Dumont for illegally selling her son into slavery. Ergo, in 1828, Truth was the first black women to successfully challenge a white man in court with such a case. This case would be a turning point in history because of all the challenges Sojourner was to face in order to win the trail.

After winning the case, Sojourner and her son moved to New York City, where she would work for two men consecutively. Truth worked as a housekeeper for the first man, Elijah Pierson, a Christian evangelist, who later died of poisoning. The second man, Robert Mathews, who was also a religious leader known as Prophet Matthias and Truth’s later employer, was arrested for the murder of Elijah Pierson. Being that Truth was under employment of Matthews at the time and was previously employed by Pierson, she was accused of aiding in the murder. In addition, the Folgers, members of Pierson’s cult, accused Sojourner of attempting to poison them as well. There was not enough evidence supporting that Matthews committed the crime, so he was acquitted. After Sojourner was found innocent of being an accomplice to the murder of Elijah Pierson, she filed a lawsuit against the members of Pierson’s cult, the Folgers, for slander. In 1835, Truth was yet again the first African-American woman to win a civil case of that sort.

As mentioned earlier, during her first few years of freedom, Truth had converted to Christianity, particularly Evangelical faith. This could be the reason she worked for both Pierson and Matthews, as they were both significant in the Christian community. In 1843, Isabella Baumfree changed her name to Sojourner Truth, which translates to traveling preacher. This was the first step in devoting her life to Christianity. In the same fashion, Truth traveled to attend and even hold her own prayer groups across New England. She later went on to join the Northampton Association of Education and Industry in Massachusetts. The organization was founded by fellow abolitionists, such as Fredrick Douglass and William Lloyd Garrison, with the intent to support broad reform, ranging from women’s rights to opposition of war. Truth lived on the self-sufficient community grounds and made connections with several abolitionist leaders during her stay.

After the community broke up, Truth published a memoir entitled The Narrative of Sojourner Truth: A Northern Slave. William Lloyd Garrison, whom she met through the Northampton community, wrote the introduction to the book. Provided that truth did not know how to read or write, Oliver Gilbert wrote the rest memoir with the information she provided him. Truth’s narrative not only included her recollections of her experience as a child growing up in slavery, which were not limited to sexual abuse, whippings and beatings, but also contradicted the southern belief that slaves were satisfied with their condition and could not be self-sufficient or independent. From the revenue she acquired from her autobiography, Truth was able to purchase a home in Cattle Creek, Michigan.

After her memoir was published, she continued to make her voice heard by delivering speeches at several events across the nation. She made sure that people were aware of the hardships she endured as a slave leading up to her eventual freedom, but what made her speeches so effective and inspiring was her use of reason and religion, opposed to aggression and violence that was seen from other abolitionists. While touring she realized women did not have the right to vote or hold official political positions. In other words, it dawned on her that not only was she being oppressed because of the color of her skin, but she was also being struck down for her gender, both of which were far from a just reason. Because of this, she scolded and reminded her fellow advocates that women – both black and white – should not be forgotten, as they too did not have political standing or rights. Still other civil rights activists believed her to be too controversial and did not head her warnings. But Sojourner would not stop at antislavery reform and women’s rights, she also fought to repeal capital punishment. She even took her case to the Michigan state legislature to voice her opinions on the practice of the death sentence.

In October of 1851, Truth delivered her famous “Ain’t I a Woman” speech at the Ohio Women’s Rights Convention. The purpose of her speech was to persuade her audience that women – especially black women are equal to men and deserve equal rights. She effectively does this by using several rhetorical devices, such as repetition. Her repetition of the phrase “ain’t I a woman” did not limitedly convey her pent-up frustration, but also contradicts arguments made by others. For example, in her speech she addresses the belief that women should be pampered and babied by sharing her experiences as a woman of color. By doing this she challenges and questions the belief as she was not spoiled or especially take care of because of her skin color, despite her gender.

Truth did allow this to slow her down as she continued to travel and spread awareness of abolitionism and women’s rights. With all the recognition she accumulated, she set out to recruit black troops for the union army. This was due to increased tensions and sectionalism between the northern and southern regions. In regard to notablebiographies.com, even Sojourner’s grandson, James Caldwell, enlisted in the 54th Massachusetts Regiment. Eventually she was granted permission to serve in a hospital as counselor for the Freedman’s Relief Association, where she sought to improve living conditions for African-Americans. She achieved this by helping ex-slaves build new lives for themselves. In October of that year, she met Abraham Lincoln and spoke to him about her religious beliefs, experiences as a slave and as an African-American woman.

Sojourner continued to fight for her and other people’s rights after the Emancipation Proclamation that passed on September 22, 1863. She did so by riding in vehicles that were built solely for whites. Although her arm had been dislocated by a conductor who would not allow her to ride in a trolley, she won the right for African-Americans to share trollies or streetcars with whites. She also argued that in order for former slaves to be independent, they needed to be able to own property. As a result she created a program to help create jobs and careers for poverty stricken African-Americans after the war. Despite her efforts, no action was taken by government officials.

Although truth had much more that she wanted and could accomplish, she fell ill and was forced to return to Battle Creek, Michigan. Sojourner Truth died in her home on November 26, 1883 and was buried alongside her family at Oak Creek Cemetary. Although Truth is no longer with us, her efforts for equality continue to live on and inspire for generations to come. Sojourner Truth will forever be remembered as one of the most prominent abolitionist and women’s rights leaders.